From childhood (5-13years), children do have time talk to their parents about everything they are facing and what they have in mind to do. But, when they turn to Teenagers (13-19years), they tends to keep secrets and whenever they are asked of something, they either turn it to argument which may turn the house to battleground or give a chipped response to any question they don’t wish to answer.

For you to become a very good and respected father or mother, you must give your teenagers a chance for him/her to move from from “level zero” to “level hero” but, in a very careful ways.

It’s true that most teenagers wants freedom untimely while some parents are overprotecting. And in this instance, there will be a very bitter relationship between the parents and their teens.

But right in this article, you will learn 5 tips on how you can Build Good Relationship With Your Teenager. Read below:-

Most parents don’t have time to have good relationship with their teens as a result of lack of communication. For you to build a good relationship with your teenagers, you must make use of any available opportunity to talk to them orally.
As said above, most teenagers keeps secret than before but, when you do create time to talk to them, gradually, they will be telling you what’s going on with them.

A Nigerian adage says that “too much talk does not full the basket”. No matter how much you talk emotionally or inspirationally, your teenager will heed to you if he wish to.
Don’t start any argument with your teenager because, this will make your relationship more bitter than ever.
Make your point cleared to him/her and leave if the teenager didn’t give any response or contribution. When he/she is alone, your message will be reasonable.
So, to build a good relationship with your teenager, give a chance to him/her to ponder over what you have said. 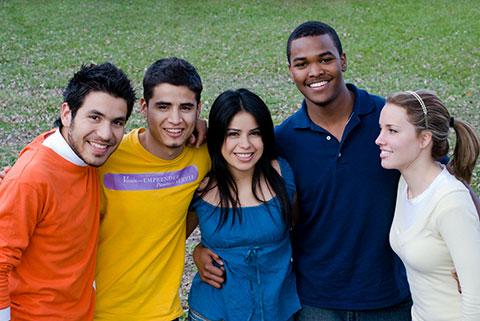 *3 ==> Don’t Interrupt When Your Teenager Is Contributing To The Discussion.

When you are talking with your teenager, he/she might be moved either negatively or positively and, your teenager may what to say something. Do not interrupt, hear what he/she want to say so that you can understand what’s in his/her mind.
And when replying to what your teenager said, be very careful with what you say, don’t scold him/her at that instance.

*4 ==> Do Not Over-react During Your Conversation

*5 ==> Lastly, Guide Your Teenager Rather Than Dictating.

According to awake magazine, “Your teen’s abstract thinking skills are like muscles that need to be developed.” So, during your conversation with your teenager, don’t command him/her but rather, guide your teenager on what is right and as well, tell him/her about the consequences between both negative and positive options he/she choose.

After guiding your teenager, don’t force him/her to obey what you’ve said. Remember that his/her abstract thinking is like muscle. Your teenager needs to do exercise him/herself for it to develop.

You can make your freedom extension and gaining your parents’ understanding at the same time.

Below are summary on how you can achieve this.

*1. Talk to them regularly and openly about what is on in your life.

*3. Also, when you are offended, tell them and they will apologize (if they are considerate).

*4. Always ask your parents if you have done something wrong and, apologize if there’s any.

*5. Ask them about their plans for you and, tell them yours.