Tyson Fury: I Will Beat Anthony Joshua Before 180,000 Fans In Lagos, His Hometown

The British heavyweight, Tyson Fury has vowed that he will beat Anthony Joshua who is a citizen of Nigeria from the city of Lagos.

Tyson Fury has been calling out Anthony Joshua in a fight ever since he wad crowned the world heavyweight champion after defeating Ukraine’s boxing legend, Wladimir Klitschko at the final match. 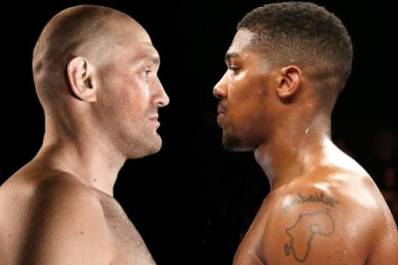 According to interview with iFilm TV, Tyson Fury said, the fight between him and Anthony Joshua may not be at Wembley, it might be in Nigeria in Lagos city where he heard that there is 180,000 seater there.

He continued that, he is considering he is the Nigerian Nightmare and said they will go over there (Lagos, Nigeria) or it could at Croke Park in Ireland that has the capacity of accommodating alot of people or likewise, at Wembley stadium.

During different interviews with Tyson Fury, he has been hinting that he will return to the ring for a short at the WBO, IBF and IBO heavyweight belts at September.

Tyson Fury is said to have been banned from pertaking in any official fights due to his drug addicts but now, he seems he is overburden with how Anthony Joshua was crowned as the world heavyweight champion. Let look forward for the fight between the two lions… Who will win? Any predictions and if it’s right shall be rewarded. Drop your view(s) below.