Veteran American Rapper & Actor, “Ice Cube” Was Honoured With A Star On The Hollywood Walk Of Fame in California 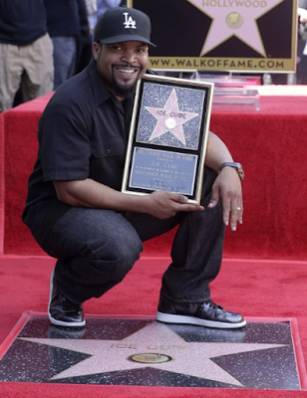 A verisimilitude congratulations to this US rapper and actor, Ice Cube who was just honoured with the award of “a star on the Hollywood Walk of Fame” in California on Monday, June 12, 2017.
His family, fans and friends came to rejoiced with him on his meritorious achievement. Among his friends at the event were John Singleton and Rapper WC.

Ice Cube thanked and dedicated the award to his mother, Doris Benjamin and Hosea Jackson for their unending support in his life.

“Thank you mama for always supporting whatever I wanted to do, whether you was with it or not, you said, “As long as it kept you off the street, you can do it. A lot of guys don’t have their fathers around, and if you want to make a man like this, stay around your sons. Stay around your kid.”

Congratulations to Ice Cube once again as he walks his way on the Star on the Hollywood Walk of Fame in California. The honour shows that he is a legend and an outstanding figure among others.