In Ibadan: Lifes & Over 300 Houses Were Destroyed By Flood

According to the South-West Zonal Co-ordinator of National Emergency Management Agency, Mr. Yakubu Suleiman just revealed to us that in Ibadan, the largest city in Africa, over 300 houses were destroyed by heavy rainfall on Tuesday, 20 June where properties worth millions of Nigerian currency were also destroyed in the process. 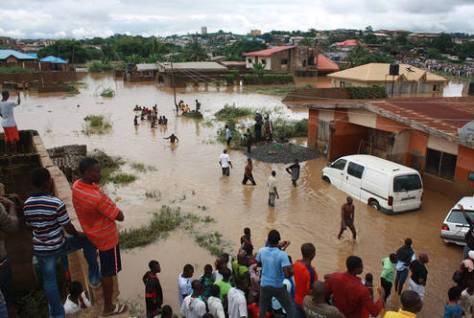 In the process of the heavy rainfall, alot of houses, properties, public and religious building was destroyed including a Celestial Church of Christ in Orogun, off UI-Ojoo road. Apart from this area, there are also seven other areas affected by the heavy rainfall, they includes: Ariyo, Kute, Eleyele, Onipepeye, Oki, Akobo and Olodo.

According to NEMA, the numbers of families who lost their lives untimely in the process is not yet ascertained as they are currently making all their effort to collate more information about the catastrophic incident and also, the agency will also make sure they get the numbers of livehood materials that were also displaced in the process of heavy rainfall.

NEMA continued that the major cause of the gruesome flood is due to indiscriminate dumping of refuse waste into the river and building of illegal structures on the path where flood and river water should follow.