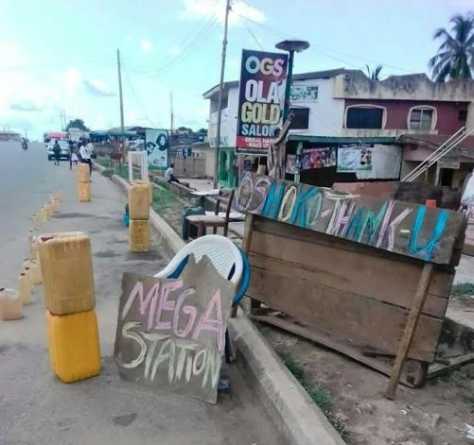 Mr. Ayodele Fayose and the Ekiti state chapter of Independent Petroleum Marketers Association of Nigeria, IPMAN, are both exchanging feuds over the governor’s decision to demolish all petrol filling stations in the state.

The Governor himself have supervised the demolishing of some petrol filling stations in some areas of the state.

To shows that the governor’s acts is unanimous, the oil marketers in the state has embarked on a long strike action.

To support the oil marketers in the state and to deal with the governor’s arrant and unanimous decision, the National Union of Petroleum and Natural Gas Workers has made a strong order that, there should be no delivering of either petrol or gas to any part of Ekiti State.

The wish of the Black Market dealers in Ekiti State have been coming to pass with the help of Governor Ayodele Fayose. No any legal action against the illegal selling of petroleum products in the state and of course, these Petrol Black Market Dealers are making their money, that is why the are thanking the state governor for lingering fuel scarcity in the state.