A 16-years-old Girl, Bukola Zoffun Who Won The 2017 Spelling Bee Competition Is Going To Be A Governor in Lagos State For One Day

Who Is Going To Be The Next ‘One Day Governor’ In Lagos State For This Year, 2017?

Definitely, joy is even, has been celebrating itself in Bukola Zoffun’s family after the 16-years-old girl won the 2017 spelling bee competition in Lagos state.
Bukola Zoffun, a female student of the Awodi-Ora Secondary School in Ajegunle also won herself the sum of N250,000 with the promising position of “A-day Governor” in Lagos State. 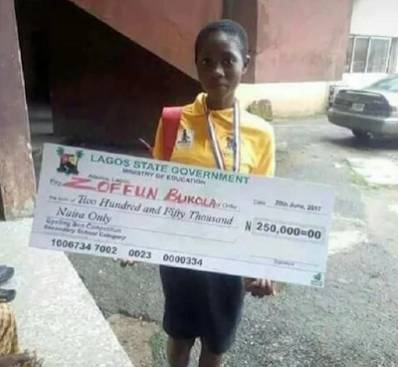 The Spelling Bee Competition was organized by the Lagos State Ministry of Education which they have been organizing since 2001 with the culture of awarding the winners the position of being the Governor of Lagos for just a day.

While Bukola Zoffun was speaking with the news reporters, she said that, she had been putting her best effort to win at the primary level when the spelling bee competition commenced but fortunately for her, she finally made it as the proud winner of the competition.

In her speech, she said dreams of becoming a lawyer and, winning the spelling bee competition will help her in pursuing that dream. She said:

Dr. Idiat Adebule, who is the Lagos State deputy governor was represented by Mr. Lanre Ogunyemi who is the chairman, Lagos State house of Assembly committee on Education, said the spelling bee competition is getting better and advanced everywhere due to the Teachers and Students’ seriousness with the way the Lagos State government is promoting Education system in the state.

The chairman praised the students who participated in the spelling bee competition and promised them that the government will add more curriculums to increase their performances and the state educational standard.

Congratulation to them all for their academic performances. May God continues to give to them wisdom, knowledge and understanding and, this is a great epitome to High school students that, “Their Is Reward For Every Academic Performance”.