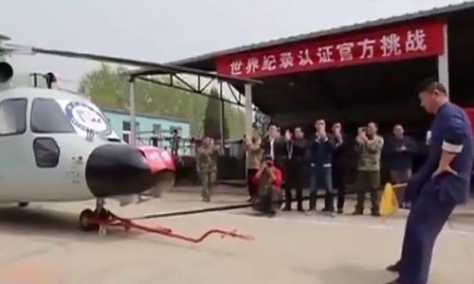 A chinese Man, Ye Hongwei moved an Helicopter and Motor vehicle with his manhood. Nobody could easily believe it but, believing this or not, the world record page has been opened for this Chinese Kung fu man as he used his talent to amaze the entire world. The man whose his news has been driving crazy on both the real life and the internet has driven seven cars with his penis before moving an helicopter.

Ye Hongwei towed a very heavy helicopter with a rope tied around his manhood and the helicopter at Hangar in Fangshan District, Beijing. At first, he was heavily struggling to move the helicopter but he fortunately succeeded in dragging it by 10 metres which is over his target of 8 metres.

On attaining this incredible achievement, he was immediately presented with a world record certificate by the officials representing the World Record Academy.

While Ye Hongwei was Speaking about the unbelievable event, he said:

“I don’t know why I struggled in the beginning. I felt a bit nervous and unsure. But I mustered up the energy needed and started the helicopter moving.”

He added that, he has been practicing what he just showcased otherwise termed as “Zen tai Chi” for whooping 30 years from his home town in the city of Zibo located in East China’s Shandong Province.