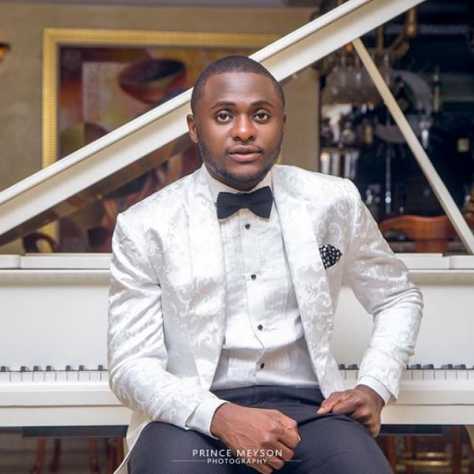 Mr. Ubi Franklin, The Chief Executive Officer of Made Men Music, otherwise known as “Triple MG” has today escaped being stabbed to death by an angry Chinese man, who is reportedly a manager of a furniture showroom in Lekki, Lagos. Sharing a photo of the man in Police Custody, Ubi wrote;

“Earlier today I was at LIFEMATE furniture show room at the palms Lekki to enquire about a service I paid for that wasn’t attended to. I was then asked by a junior staff (Nigerian) to speak to his “OGA” (a Chinese man). The Chinese man paid me no attention when I approached him with my concerns, he rather walked away as I was still trying to make my concerns known to him. So I followed up to say his attitude was unacceptable and then proceeded to leave the shop since he wasn’t going to pay me any attention or courtesy as a returning customer.

“As I was walking out the door I heard someone scream, I turned my back, only for me to see the Chinese man running towards me with two knives. But for the quick intervention of my cousin the story would have been different.

“I handed him over to the police who then transferred him to Maroko police state and he was asked why he wanted to stab me and he said Cos I said “see this Chinese man o”. Anyways God got me covered Physically and spiritually.

See the photos he shared below:- 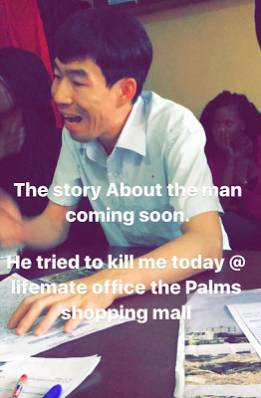 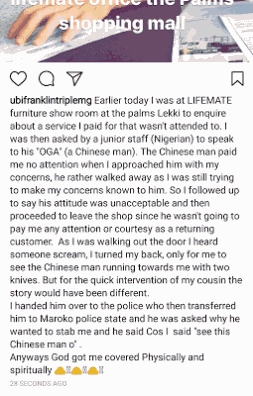