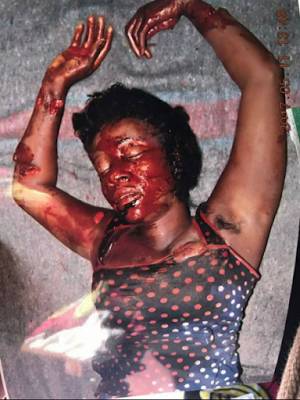 A Man Butchered His Wife For Reconciliation Refusal in Ghana

In Ghana, a young man allegedly killed and butchered his Ex-Fiancee because he tried to reconcile with her but the young lady refused his reconciliation offer.

The butchered lady is reported to have dropped out in relationship with her kids and moved to his aunt’s House when she was tired of enduring physical battery and above he was inflicted to, by her Ex-husband.

The man who butchered his formal babymama tried to win her back into the relationship but the lady refused and her refusal exasperated him bitterly than ever.

After the lady had refused her husband reconciliation, she went back to her aunt’s house but unfortunately for her, her husband followed her and butchered her there with a cutlass. A woman who lives very close to the neighborhood found her in coma and immediately rushed her to the nearest hospital but unfortunately, she died on the way.

The funniest thing about the culprit who butchered his wife is that, when he heard that he didn’t succeed in killing his wife, he came down to the hospital scene to finish her but was arrested by police officers.