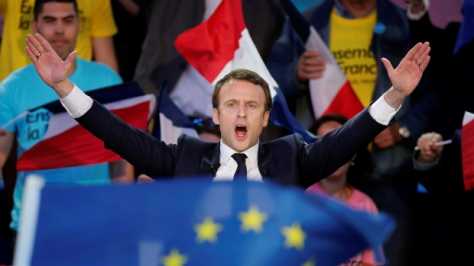 In France, Former banker & Economist, Emmanuel Macron who is just 39 married to 64 years old woman,has set a new record when he became the youngest president ever in the history of France leaders.

He made the record after winning 65.5% of the vote in a tense election against far-right National Front (FN) candidate Marine Le Pen, 48.

The most interesting thing about his is not only he is the youngest president ever in France but his political party, En Marche! ‘On the Move’ has existed for just more than a year.

Once Presidential contestant but defeated, Madam Hillary Clinton took to her Twitter page to congratulate Macron:

Victory for Macron, for France, the EU, & the world. Defeat to those interfering w/democracy. (But the media says I can’t talk about that)

Congratulations to Emmanuel Macron on his big win today as the next President of France. I look very much forward to working with him!