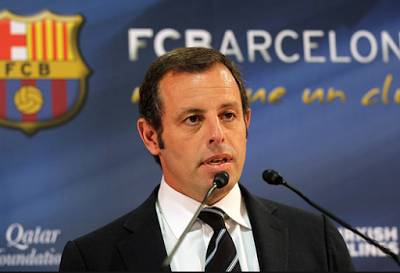 Former President of Barcelona, Sandro Rosell Was Arrested For Money-Laundering Alongside With His Wife.

Sandro Rosell, the former Barcelona President has been arrested in the process of Money-laundering investigation.

Spanish newspapers El confidential reported that the arrests is part of a joint operation between Spanish police and FBI, which is related to the United States-led investigation on corruption at the world football governing body, FIFA.

Numbers of people has also been arrested by police officers when they raided nine offices and homes in north-east Catalonia.

Mr. Sandro Rosell was the president of popular football club, FC Barca from 2010 to year 2014 before he resigned immediately after Spanish court’s decision to investigate the Signing contract of player Neymar in 2013.

In June 2016, FC Barca paid a fine of £4.7 million over Neymar move from Santos.
The club was accused of tax fraud which they denied.
Following Mr. Sandro Rosell arrest, his wife was also taken by the police.