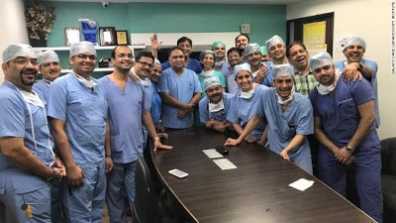 In India, A 43-years-old Mother Successfully Donates Her Womb To Her 21-years-old Daughter

In India, an old woman of about 43-years-old donated her womb to her 21-years-old daughter with the regards that her daughter will be able to have pregnant and give birth to offspring in the future as the 21-years-old baby was born without uterus.

The womb transfer surgery between this alleged mother and her daughter is the first of its kind in India’s history. It was successfully performed by a team of respected and veteran doctors at Pune’s Galaxy Care Hospital located in Pune City of South-West India.

The First in India of womb transfer surgery between the 43-years-old Woman and her 21-years-old daughter was performed by the team of doctors yesterday and was led by the hospital medical director, Doctor Shailesh Puntambekar. As it was reported, the womb transfer lasted for 9-hours, 30-minutes and fortunately, the surgery was successful as the 43-years-old woman and her daughter are fine without any pain or blood spillage.

The doctors said the 21-years-old lady who received womb from her mother will have to be patient and Wait for at least a year before she thinks of getting pregnant because, her body system needs enough time to heal and adapt to the new uterus.
She is currently under thorough observation in case of any impromptu incident for some days.

“The patient was born without a uterus and she wanted to have her own baby and was not ready for adoption or surrogacy. Since they knew about the uterus transplant, they approached us and accepted the surgery option. Fortunately, her mother was found to be a medically suitable uterus donor for her.”

The doctor explained that the womb transfer between the 43-years-old woman and her 21-years-old was very tedious and technically tough as they battled tensely with their veins and arteries.

“The procedure is difficult because multiple large arteries are to be joined there, and veins that are small and short. It is technically very tough.”

A professor of obstetrics and gynaecology at Sweden’s University of Gothenburg, Dr. Mats Brännström said only six babies has ever been produced from womb transfer, two from the same mother. He said they will been watching out maybe this India’s first womb transfer will result to a birth but Dr. Puntambekar said he is confident and felt relaxed that the 21-years-old lady will give birth in the future.