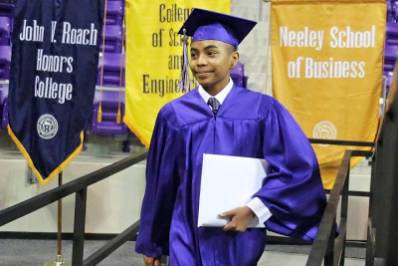 Carson Huey-You, A 14-years-old boy made a scintillating record in the world as he becomes the youngest ever person to graduate from Texas Christian University. Carson Huey-You was among the excited students of 2,000 degrees at the fort worth school.

Carson Huey-You started as a student of Texas Christian University, (TCU) in 2013 when he was just 11-years of age and he graduated on last Saturday.

When he was in the university till he graduated, he has minors in his indigenous languages, Chinese and Mathematics.

When he was asked about his favorite thing in his life as a scholar in Texas Christian University, he said his favorite thing about university was getting to learn what he has never learnt before and what he never knew about its existence before and might not even think about thinking about.

He added that he has learnt how to deal with “some real hard classes” and mount over the disappointment of getting poor score in a test.

He regarded himself as a “Normal Dude” because of his characters, he said he always want to work on getting graduate degrees in quantum mechanics.

Congratulations to Carson Huey-You the “Normal Dude” for this graduation success and making a renowned record in Texas Christian University and for being a good epitome to young lads like him.