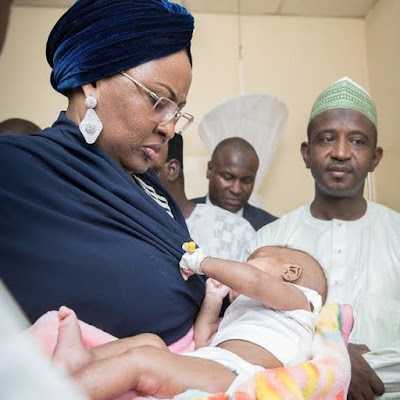 Yesterday, The first and Second ladies of Nigeria, Aisha Buhari and Dolapo Osinbajo respectively has visited Khadija Bashir, the 8-months-old baby who was raped when she was 6 months old, at the Aminu Kano Teaching Hospital in Kano.

Khadija Bashir was reportedly raped by an unfortunate man who hid under the felonious cover of being childless and fake revelation he saw where he said he was asked to sleep to an infant if he want to stop fornication, womanizing and of being a drunkard.

The worst thing that really surprised me is that the man and his wife planned and raped the child because they were allegedly told it as the way they would get their own kids. The 8-months-old baby has now had surgeries because of the injuries she sustained during the rape.
The case of the man is presently in the court of law and the rapist has hired a number of lawyers
to speak for him.