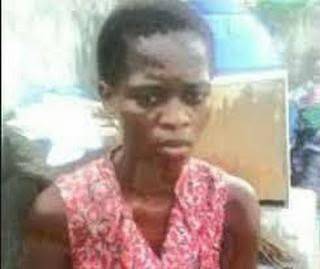 Yesterday, Onyinyechi Akunne was sentenced to seven years imprisonment for stabbing to death her 35years old husband, Abuchi Akunne to death with a kitchen knife during a bitter argument over lotto tickets known as “Baba Ijebu” at their apartment at No. 85, Idimu Road, Ejigbo, a Location within Lagos on March 28th 2015.

Justice Josephine Oyefeso, who was the presiding judge on the case sentenced her to prison after she said and pleaded she is guilty for causing bodily harm to her husband as against the initial charge of murder.
Justice Josephine Oyefeso rejected a clause in the plea bargain agreement where it was proposed that Akunne should serve a sentence of community service instead of a prison term.

“In view of the defendant’s pleading guilty, I hereby find her guilty of one-count charge of grievous bodily harm. I hereby sentence her to seven years in prison starting from the day she remanded in prison custody which was March 28, 2015.”

Before the judge pronounced the judgement, the woman’s counsel pleaded the court to have mercy on the woman as she is still nursing a 7-months-old baby.

“The defendant is a first-time offender, she is a mother of a toddler which she gave birth to while in prison custody. Her daughter is a year-and-seven months old, she still has a lot to offer to the society.”

Oyefeso however ordered that Akunne’s daughter who has been with her in prison since 2015 should be transferred to her family once she is serving her term. Mrs C.K. Tuiyi-Carena, who is the Prosecutor representing Lagos state government had told in details how Akunne killed her husband.

“On the day of the alleged murder, Onyinyechi was preparing a meal while Abuchi was sitting on a chair in their home looking at his “Baba Ijebu” lottery tickets. Angered by her husband’s action, Onyinyechi scolded him for his love for gambling and a fight ensued between them. She took the kitchen knife she was using to cut vegetables and stabbed her husband fatally in the chest. The stabbing inflicted a deep cut in Abuchi’s chest which led to excessive blood loss and his eventual death. The victim died before he could be taken to a hospital by Onyinyechi and concerned neighbours.”

The woman is reported to be pregnant when she committed the grievous offence was and she gave birth to a baby girl while in police custody at the Kirikiri Female Prisons. Akunne’s baby was in court when she was sentenced to 7 years jail term.